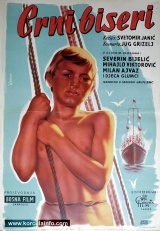 Born in 1922 in Opot, Serbia. He worked in Avala Film in 1947 and 1948 and then moved to Sarajevo where he worked for Bosnia Film prior to becoming an independent filmmaker.  He wrote and directed numerous documentary and fiction films. His 1958 fiction feature BLACK PEARLS shared the Best Film Award with the Soviet film SERYOZHA at the First International Youth Film Festival in Cannes in 1959. It also won a Special Recognition at the Pula Film Festival, the UNESCO Gold Fund award and Bosna Film’s production award. BLACK PEARLS represented Yugoslav cinema at numerous international film festivals, including in Locarno and San Francisco, and won him the City of Sarajevo’s annual April 6th Award. His second feature, A PIECE OF BLUE SKY, was screened at the Moscow International Film Festival. He also directed EARLY FALL (1962), VOTE FOR LOVE (1965) and CLAY PIGEON (1967). He died in 1984 in Sarajevo.