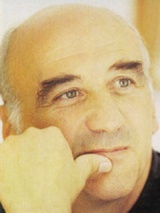 Born in 1939 in Sarajevo, Bosnia-Herzegovina, where he graduated from the Faculty of Architecture and Urban Planning. He began his career as an assistant director under several national and international film directors, including Tomo Janić, Gojko Šipovac, Veljko Bulajić, Nikola Stojanović, as well as the French director Alexander Astruc. He published film reviews and stories in various newspapers and magazines, including Naši dani, Oslobođenje, Odjek, Sarajevske novine and Putevi. He directed feature-length fiction films FRAME FOR THE PICTURE OF MY BELOVED (1968), LIFE IS A MASS PHENOMENON (1970), FRECKLED GIRL (1982), THE SMELL OF QUINCES (1982) and AZRA (1988). He co-wrote screenplays for all his fiction features. LIFE IS A MASS PHENOMENON earned him and his co-writer Duško Trifunović the Special Recognition for Screenplay at the Pula Film Festival. THE SMELL OF QUINCES was the Yugoslav submission for the 1983 Best Foreign Language Film Oscar award. He died in 1997 in Sarajevo.