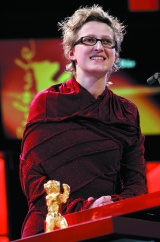 JASMILA ŽBANIĆ was born in 1974 in Sarajevo. She graduated directing from the Academy of Performing Arts in Sarajevo. In 1997, along with her friends, she founded Artists’ Association "Deblokada". Her feature debut GRBAVICA won the 2006 Berlinale Golden Bear as well as numerous awards. ON THE PATH, Jasmila’s second feature film, premiered at the 2010 Berlinale, in the Competition section and was distribution on 25 territories and won numerous awards. Besides of many awards that Jasmila Žbanić received for her professional work, she also received one of the most prestige European cultural awards: Kairos for 2014.