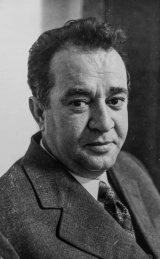 Born in 1926 in Sarajevo, Bosnia-Herzegovina, where he also studied philosophy. Prior to switching to narrative features, he directed numerous documentaries, promotional and propaganda films. He joined Bosna Film in 1948. His most important documentary films include UNVEILING OF WOMEN (1949), RAILWAY LINE MEMORIES (1952), MEN OF THE MOUNTAINS (1954), BE CAREFUL CHILDREN! (1961), HEADSTONES (1981) and BARE HANDS (1981). In 1956, he directed a segment in the anthology film VORTEX, produced by Sutjeska Film.  His segment of the film, titled FATHER, drew significant attention at the Pula Film Festival. His feature-length narrative film THE DEMOLITION SQUAD (1957) won the Special Recognition for Directing at the Pula Film Festival. In 1969 he directed THE BRIDGE and three years later he completed VALTER DEFENDS SARAJEVO which earned him the Silver Arena for Best Director at the Pula Film Festival. Both films were awarded at the Film Festival in Niš. Krvavac directed his last narrative feature, BATTLE OF THE EAGLES, in 1979. His films were among the most popular in Yugoslavia and had attracted significant attention abroad. VALTER DEFENDS SARAJEVO was released in cinemas in over 10 countries and at one point was the most popular foreign film in China. He won the City of Sarajevo’s April 6th Award. He died in 1992 in Sarajevo, a few months after the beginning of the 1992-95 siege of the city.