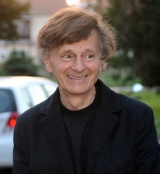 Born in 1935 in Sarajevo, Bosnia-Herzegovina, where he graduated from the Faculty of Philosophy before graduating in directing from the Academy for Theater, Radio and Television in Belgrade. He worked as a journalist, wrote two collections of short stories, several travel books, two novels and several plays for radio and television, as well as a few screenplays. He worked as assistant director on A. Wajda’s 1962 film SIBERIAN LADY MACHBET and on J. Kawalerowich’s 1966 film PHARAON. He won the City of Belgrade’s October Award for his staging of Sartre’s DIRTY HANDS. He directed television film THE FIFTH COLUMN based on Ernest Hemingway’s play of the same name. He directed several short films, essay film THE PARADOX OF CHESS, as well as travel films ICELAND and SUNDAY AFTERNOON IN GREENLAND. His first feature fiction HOROSCOPE (1969) was screened in numerous national and international film festivals, including festivals in Pula, Rabat, Pesaro, Locarno, New York, San Francisco, London and Sydney. The film won the Special Award for Directing in Pula, the award of the Union of Communist Youth of Yugoslavia, the International Critic’s Award in Berlin, as well as directing and screenplay awards in Chicago. His second feature THE ROGUE was screened at film festivals in Sydney and Melbourne. His BURNING, just like HOROSCOPE before it, was set and filmed in Herzegovina. He wrote several books about theater and film, including CHANGES (1965), LABIRINT (1980) and MOVING IMAGES (1981).