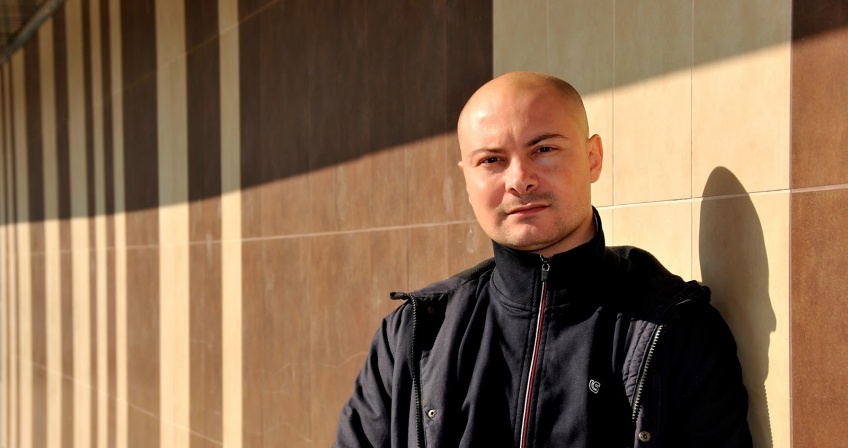 This year we will have the opportunity to see two films in which Srđan Šarenac has been involved.

Today, at 14:45 in Cinema 4 of Multiplex Cinema City THE ROAD MOVIE by Dmitri Kalashnikov, that has been co-produced by Šarenac, will be screen and on Monday, August 14th, at the same time and at the same place, audience will have an opportunity to see documentary film TWO SCHOOLS directed and produced by Šarenac.

For you, we talked to Srđan.

For the past few years you have been working as a scriptwriter, director, producer… And not only on your own projects, but also as a co-producer on foreign projects, which is visible on the example of THE ROAD MOVIE. What are the advantages of working on the several different positions? Was that a conscious decision or it just happened gradually because of the circumstances in which we are producing the films and the fact that individual must take more responsibility to see it happen?

I am working as a film director and scriptwriter since 2000 and as a producer since 2008. I graduated directing from Faculty of Drama Arts in Belgrade in 2006. After that I continued studying scriptwriting at Binger Film Lab in Netherlands in 2006 and then I received MA in Audio-visual Production from Media Business School in Ronda in 2012. So, I finished school for all those positions (director, scriptwriter, producer) and I don’t know how I would be able to do any of it if I didn’t go to schools for it.

The advantages of knowing how to work in all those different positions is that you learn how to predict and resolve the problems you might stumble upon while you’re still in pre-production of the film. In our region individual must take the risk when he (or she) goes into filmmaking because the demand for the films is not that big and we must make our own audience.

Why did you decide to co-produce THE ROAD MOVIE? How do you choose the projects you will going to co-produce?

I am very proud I have been a co-producer on THE ROAD MOVIE. This film didn’t have “shooting part” as it has been made from clips we acquired rights for. Main producer Volia Chajokuskaya, whom I met at International Minsk Film Festival where my previous film VILLAGE WITHOUT WOMAN won an award, invited me to join the project. Every film depends on the crew that is involved in its making and we had the great support from Aleksandar Govedarica who is the representative for American-Canadian distributor Syndicado. I think you must follow some kind of gut feeling when you are choosing the projects, you have to be sure you can bring something into the project. THE ROAD MOVIE had a great success so far. It premiered at the most important documentary film festival IDFA Amsterdam in Competition Program and it has been screened at 70 different film festivals including Hot Docs (Canada), True/False (USA), Sheffield (UK). American distribution company Oscilloscope has bought the rights for the film so it should also hit the theatres in North America, soon.

Audience will have the opportunity to see your film TWO SCHOOLS on Monday as part of the BH Film Program. The film is dealing with complicated political phenomena that most of the people decide to ignore – phenomena of “two schools under one roof”. What do you think, how important is it for the film author to be politically engaged through his projects?

I would like to start with the quote from the review published after the premier at Zagrebdox: “How football managed to connect Croatian and Bosniak high school students – that could be the under title of TWO SCHOOLS by Srđan Šarenac, who follows preparations for Christmas Football Tournament in the old Travnik Gymnasium, that is now separated into Croatian and Bosniak part, that should finally introduce the students who spend their time in two separate parts of the same building.”

I think author should be able to recognize the difficulties and offer possible solutions. Of course, not every author has to be politically active through his work.

How was it to work in the community that is so obviously divided? What is the common ground for those two groups aside from the football court?

There were many challenges to be faced. It took me more than three years to shoot the film. They have lots in common as they are the same age. Film is concentrating on high school students who are the 4th and final grade of the high school. They are at the end of their high school education and ready for new parts of their lives.

I would be very happy if TWO SCHOOLS managed to bring positive changes and if we would, at least, have more events at which young people could meet each other.

We hear the same phrase often: art and sport are the only rescue for Bosnia and Herzegovina! How does that look on the terrain? In the film, it seems that football game just turns into some kind of time-out.

How did Josip and Muhamed reacted to shooting of the film? Did they see it? What are your expectations regarding two of them?

Josip and Muhamed will see TWO SCHOOLS at Sarajevo Film Festival for the first time. I make all of my films for the audience and it is up to them to say if I fulfilled their expectations. Film had premiere on 1st of March at 13th Zagrebdox in Croatia, and it has been screen at 10 different festivals and won the Best Script Award at Trsat Film Festival in Rijeka after that.

There is one interesting detail, we could even call it a metaphor, in the film – the school is painted in two colours: yellow and blue. Do you know if it was done on purpose or it is one more unintended metaphor?

My job is to shoot films, and the film is visual medium in which you use picture to explain something without using words. When we look at once famous Travnik Gymnasium it is visible that Croatian part is painted in blue and Bosniak in yellow. There is an iron fence between them. I believe this picture raises the interest in the audience and makes them want to know more about the film. It is definitely a metaphor.

What is next in store for Srđan Šarenac?

I always hope to shoot new films. This year I have two films at Sarajevo Film Festival: THE ROAD MOVIE and TWO SCHOOLS. None of those two projects received funds from Film Fund of Federation of Bosnia and Herzegovina, but I found a way to shoot them.

Also, I’m working on two documentaries: THE PREASON BEAUTY CONTEST and AFTER THE END OF THE WORLD. I hope that these films will be out soon and that audience will be able to see them and make their opinion on them.