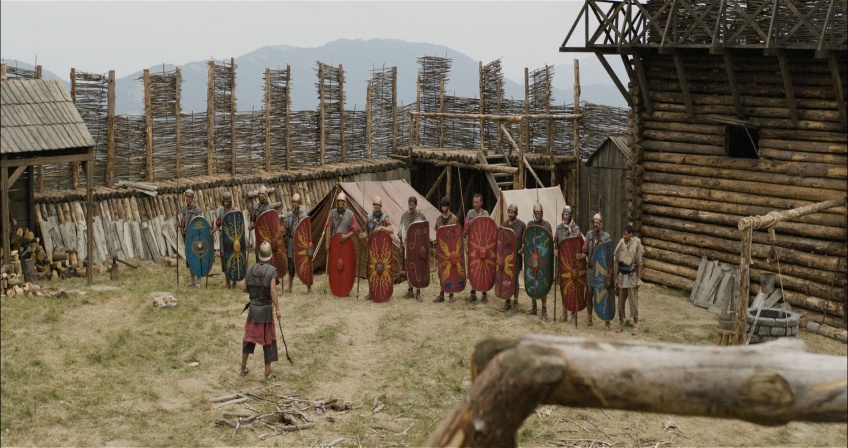 Illyricvm: Cinematographic Research into the Distant Past

Tribes of Liburnians, Dalmatae, Iapydes Daesitiates and Picti, as well as Illyricvum that all of them inhabited 37 years Before Christ, are mentioned as side notes in our history lessons. Simon Bogojević Narath seems to try to reduce this injustice done to our ancestors by making small anthropological research on film screen.

Bogojević Narath, author of several award winning short, animated, and experimental films, in his debut feature insists on multiple details that should bring the forgotten world of Illyric tribes closer to us.

Film is beginning with the picture of the wind playing with raised tent, suggesting the light rhythm that will dominate the film even though in its core Illyricvm is a revenge story. After the Dalmatae Tribe attacks Liburnians and kills and rapes one of their women, a young Liburnian Volsus, risks being kicked out of the tribe and curses leader of Dalmatae: “I’m demanding blood for blood, gut, for gut, bones for bones, eye for an eye… Let every Liburnian who ever meets you do something bad to you.” Until the moment when because of stroke of destiny Volsus manages to get his revenge, this is the most action-packed scene in the film.

At the core of Illyricvum one can find customs of Illyric Tribes. Latin and Ilyric are spoken in the film and every tribe has its specific markings and are even known for different things – Picti, who arrived the last, always have a medic with them, for example.

Shot on Bjelašnica and Velebit, Illyricvum is characterized by beautiful mountain views shot in wide shots which offers a bit of documentary feel that additional suits historical/anthropological setting Narath is going for.

Uncharacteristic for history genre, this is one calm film, without lots of action in which audience of all ages will be able to find something for themselves.