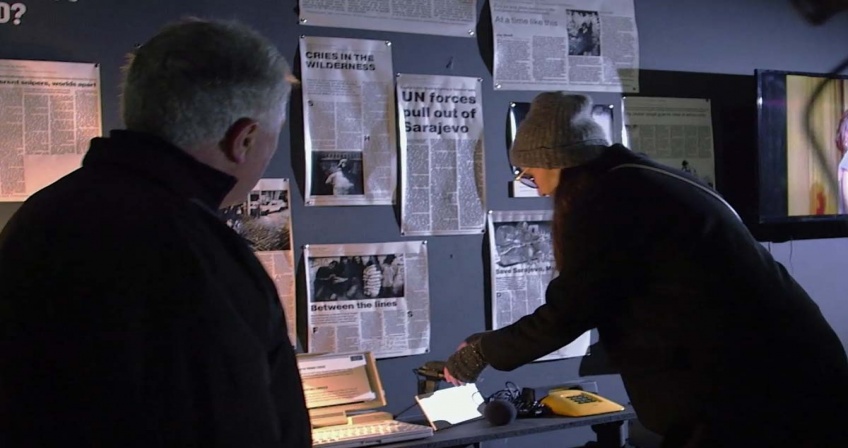 Is Holiday Inn metaphor for Sarajevo or is Sarajevo a kind of hotel on its own? Barbara Cupisti in her documentary Hotel Sarajevo follows three people, from three generations trying to find out where the secret of Sarajevo and whole Bosnia and Herzegovina is hidden.

Boba Lizdek spent the war in Sarajevo working as a translator for legendary French war reporter Paul Marchand. Holiday Inn, which became kind of headquarter of war reporters at the early days of war in Sarajevo, has been her home for a while. In the madness of war, Holiday Inn offered completely different kind of madness, reserved for the ones a bit braver or a bit crazier than the others. Thirty years later, Boba is organizing an exhibition in the History Museum dedicating to war days of Holiday Inn.

Zoran had only 13 years when the war began. He spent the war as a refugee and returned to his hometown wanting to do art there. Now he has an opportunity to do his first graphic novel, but the theme is set – he must do the novel about war. In the middle of Zoran’s novel, a yellow hotel seems to have life of its own – its Holiday Inn.

Belmina was not born when the war began. Today, she works in Hotel Holiday and through its widows she is looking at the new world that came to be after journalists left the hotel. When the war ended, time came for building a new reality. Belmina’s generation is trying to move away from war and deal with the modern life. Is it even possible?

Cupisti is trying to deal with trauma and its legacy through stories of three generations that don’t know a lot about each other. Is it possible for them to learn from each other, turn away from the past and look into the future or they will stay, as the youngsters comment: “Looking for future, but stuck looking at past.”

Hotel Sarajevo has a flair of nostalgy, but also carries a hope for a different, maybe even better future. Cupisti is showing both past and the future as containing trauma and misfortune, but also positive things and emotions that show up during the darkest of times.