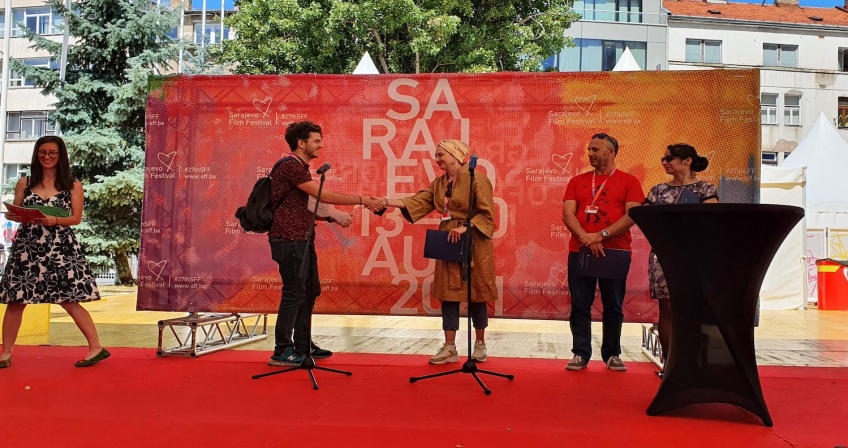 Awards of Association of Filmmakers of Bosnia and Herzegovina have been announced!

Association of Filmmakers of Bosnia and Herzegovina, has awarded its annual awards during the Sarajevo FIlm Festival. The best student short films as well as the most deserving professionals have been awarded.

Because of pandemic, the Ivica Matić Awards for contribution to the cinema of Bosnia and Herzegovina haven't been given out, so this year the awards for both 2019 and 2020 have been announced.

"As 2019 was a specific year with lots of successfully realized projects by our authors, we decided to give awards to two of our members."

It is a special happiness when there is a debut film in bh cinema. Year of 2019 brought one of these films. It was shot exclusively with money, author crew and actors from Bosnia and Herzegovina, in just 15 days with the smallest production and technical team possible. Although production circumstances shouldn’t be important when we talk about aesthetic aspects of a film, it is important to mention them because of all the brave decisions which director had to make with his production team and managed to make an excellent social drama that precisely and with subtle shading shows modern bh society, which was recognised and awarded by the juries of international film festivals. Local audience and professionals recognized that, too, so Ivica Matić award for 2019 goes to director Nermin Hamzagić for the film FULL MOON.

Rarely there is film author from Bosnia and Herzegovina who lives to see two of her or his films premiere in the same year at biggest film festivals. It is especially rare when it comes to scriptwriting. Both films have continued their festival lives and won awards all around the world which says a lot about enormous skill of the author to find specific stories with universal ideas that communicate with audience everything and tell them in film language. Credit for big part of this success belongs to scriptwriter Elma Tataragić who, working with Miroslav Terzić and Teona Strugar Mitevska, managed to shape the stories for two different environments from which these authors come and make top notch scripts. With this, she once again confirmed her scriptwriting talent and skill. Ivica Matić Award for 2019 goes to Elma Tataragić for her films GOD EXISTS, HER NAME IS PETRUNYA and STITCHES.

Award for contribution to bh cinema for 2019 goes to director, scriptwriter, cinematographer, and producer Mustafa Kapidžić. He started working on film za cinematographer in 1954 and as scriptwriter, director and cinematographer realized films about fauna in Bosnian and Herzegovinian mountains ME AND MY NEPHEW PIP (1961), IN THE FOOTSTEPS OF THE BEAR (1961), KNIGHT BODLJAN (1963) and FALCON IN THE MOUNTAIN (1984).

Sound Designer Igor Čamo has been awarded because of fruitfull and successful 2020 in which he did sound design for two feature films: Jasmila Žbanić’s QUO VADIS, AIDA? and Pjer Žalica’s FOCUS, GRANDMA. The first was awarded with multiple awards at prestigue international film festivals, most notably the ones in Sofia, Göteborg, Miami, Rotterdam, Antalya… Of course, its biggest achievement was Nomination for American Film Academy Oscar for the best foreign film and BAFTA nomination. The second, was screened at several international festivals. These films, that were realized in the previous year, are the high point of successful and committed artistic work by Igor Čamo that has never stopped since 1992. Multiple documentary and feature films he worked on and their success in country and abroad are the best proof that Ivica Matić Award for 2020 should go to Igor Čamo.

Ivica Matić Award goes to producer from Sarajevo Damir Ibrahimović for fascinating feat of producing a film like Jasmila Žbanić’s QUO VADIS, AIDA? Even without the incredible international success it had, this project would be pride of BH film industry especially because of the production level that is unrecorded in our country since its independence. In a way, this film can be seen as a crown that comes after several decades of Ibrahimović’s production an authorial work.

For the contribution to Bosnian and Herzegovinian cinema, in 2020 two authors have been awarded – Ratko Orozović and Danijal Šukalo.

Ratko Orozović is a film, television and theatre director and literary writer. Recently he has celebrated 50 years of his artistic work. In his opus he has 5 books and 2 feature films EXTRAMARITAL TRAVELS and MARITAL TRAVELS, as well as more than 50 documentary films and 700 TV films and programs. He received 11 national and 15 international awards. Also, Ratko Orozović has been organizing VIVA Festival of documentary and short film for the last seven years.

Cinematographer Danijal Šukalo has been working in film for over 40 years. He studied engineering, but love towards film won and he became one of the most important directors of photography in the history of Bosnian and Herzegovinian film. At 29th Pula Film Festival in 1982, he received a prize for SMELL OF QUINCES. He worked on several cult films including AZRA, THE MAGPIE STRATEGY, GOLDEN APPLE, LOVE AND ANGER and many other. With his exquisite photography style, he gave enormous contribution to bh film industry.

Best bh. Student Film goes to the film in which universal story of love that we all carry in ourselves and we can share with other people, or animals is showed through visually impressive, documentary point of view of beautiful and brutal natura and man who finds his home in it.  Sacrifice, compassion, equality are accented thanks to dignity with which the author treats both his main character and animals, as important protagonists of this film and in that way, similar to Sarajevo school of documentary film's manner, talks about important themes of today’s world – inclusion and ecology. Award goes to film BJELKO by Almir Zoletić.

Special Jury Award goes to the film that talks about maybe most important theme of majority of young people today and here – should they leave, or should they stay? Daring questioning of the tradition, feeling of obligation and fidelity to one’s roots, and country that binds us, and in which it is getting harder and harder to grow and develop is additionally potentiated with mature reflection on female questions inside of the rigid patriarchal environment as well as questioning of the depth of all the characters with all the good and evil that they carry inside of them without any final verdicts. The award goes to ATANASIJA by Boško Krljaš.

Special Jury Mention goes to the film that doesn't use words, but pure film language through complex and technologically demanding form of animation. While in front of our eyes the ball of different forms and colours unwinds, we are pulled into, and made a part of a whole – it shows circular movement of life in which all of us are intermingled and dependent on one another. Special Jury Mention goes to WHEEL OF LIFE by Tamara Maksimović.