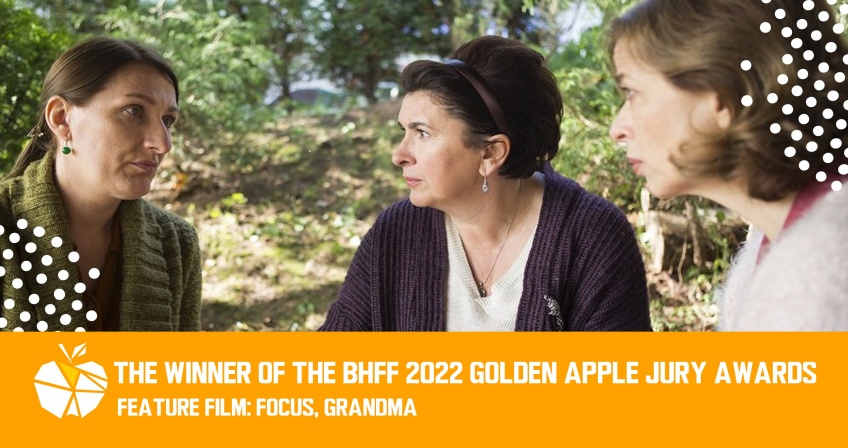 The Bosnian-Herzegovinian Film Festival (BHFF) in New York City is excited to announce the winners of the Golden Apple Awards for its 18th annual event! The winners of the BHFF 2022 Golden Apple Jury Awards were selected by this year's esteemed jurors: renowned author and Adjunct Professor Tanya Domi, TV and radio reporter Damir Šehanović, and Polish filmmaker Kamila Kuc! The festival awarded the main prize BHFF Golden Apple Audience Award for Best Picture to Igor Drljača's The White Fortress. BHFF also bestowed as well as its first ever BHFF Award for Outstanding Contribution to Bosnian-Herzegovinian Cinema to Jasmila Žbanić.

The winners of the BHFF 2022 Golden Apple Jury Awards are:

Jury’s comment: We awarded Focus, Grandma the Best Feature Film Award for the way the film cleverly uses the slowly unfolding, universal family conflict as a metaphor for the forthcoming war in Sarajevo. Pjer Žalica’s skillful writing, the mixture of drama and comedy, provide a fruitful context for magnificent performances that keep the viewers on their toes until the very end. Non-judgmental in its tone, the film shows that it doesn’t take much for unattended grievances and overdue conversations to turn into devastating conflict of international significance.

Jury’s comment: This dramatic film authentically portrays the true war time story of how journalist Aida Čerkez’s reporting assignment to interview Ismet, a survivor of World War I and World War II, convinced her to remain in Sarajevo to report the facts of the Bosnian war. The fast moving cinematography of Sarajevo during the siege and the heart rending scenes putting her toddler son and mother on a bus to Germany frees Čerkez of family worries enabling her to get out the daily reporting for the Associated Press to the world. A gripping journey through war, this film serves as an illuminating window into what drives Čerkez’s priorities when her city is faced with an existential threat of annihilation.

Jury’s comment: We awarded the film for making the river Sava, anthropomorphised in the voice of Mira Furlan, its main protagonist. River Sava functions as a witness to the times past and the futures to come, while not ignoring the present. Flowing along the borders of Slovenia, Croatia, Bosnia and Serbia, the Sava introduces us to diverse voices that speak of the ghosts of history, of desire for economic prosperity and the need for tolerance, while not shying away from revealing the existing issues that persist since the collapse of Yugoslavia.

Jury’s comment: Zrinka Cvitešić’s charismatic performance as Aida Čerkez embodied in her compelling expressions and body language created a believable portrait of a committed reporter. Čerkez, who decided to remain in Sarajevo under siege,  fighting everyday to report the truth, inspired this captivating and riveting film.

Jury’s comment: Trapped in the futility of the war and denied access to the outside world, people found ways out of the madness during the Bosnian war through access to short wave radio. Helping others to connect was the focus of this powerful movie that portrayed the desperate, yet dangerous efforts to know all was okay, or not. This evocative film is a homage to all amateur radio operators who assisted their fellow human beings to be free of mental anguish, at least for a short time, knowing their loved ones were safe through short radio conversations during a brutal war.

The top prize, BHFF Golden Apple Audience Award for the Best Picture went to Igor Drljača’s THE WHITE FORTRESS, a moving portrait of doomed first love in socially unequal Sarajevo (Variety).  In his speech, Drljača thanked the audience and the festival for recognizing his unique cinematic vision.

The festival bestowed its first ever award for Outstanding Contribution to Bosnian-Herzegovinian Cinema to Jasmila Žbanić. On behalf of the BHFF, its Director Damir Pozderac and Co-Programmers Dijana Jelača and Amir Husak state: „Jasmila Žbanić is without a doubt one of the most exciting voices in world’s cinema today, and an outstanding ambassador for Bosnia, Bosnian cinema, as well as for women filmmakers in particular. We are incredibly honored to present Jasmila with BHFF’s first ever award for an Outstanding Contribution to Bosnian-Herzegovinian Cinema. We couldn’t think of a more deserving person to receive the very first such recognition given by our festival.“