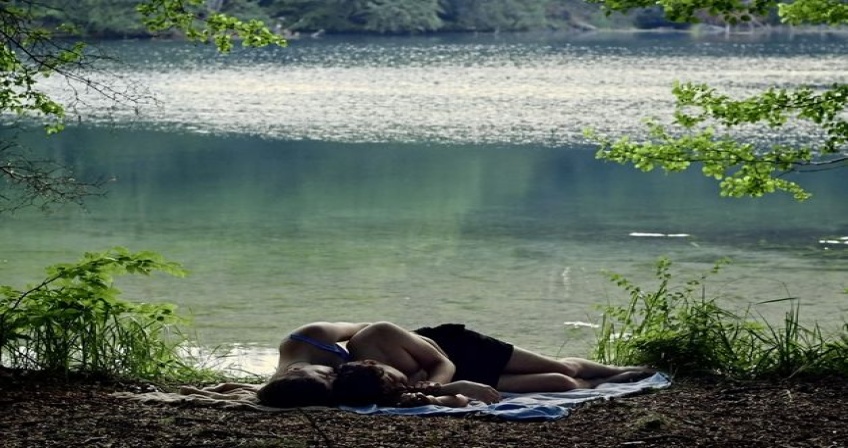 Student is reading on limnology. Fish are completely still captured in glass jars. Rooms are filled with microscopes. Berlin train station is bustling with people, and then – water. At the very beginning of the second feature film by Dane Komljen Afterwater, we are invited to leave lives of modern students and move to the world of lakes and waters that will take us in all possible directions.

Afterwater is highly contemplative film. To be able to watch it in the right manner you must be ready to kick out of your mind bustling chaos of life 21 century life and let it flow. Komljen is doing everything he can to help his audience through this process.

First part, filmed on the lake Stechlinsee near Berlin, has been shot in high resolution insisting on the beauty of the nature which reminds us on Monet at moments. Water is clear, its movement is almost invisible as it gets disturbed by wind or somebodies’ movements. It is inviting both for characters and the audience. Parallel to the images we are listening to the words. In Komljen’s Eden different languages are still echoing all around. The director is using 9 different texts spoken in several different languages to speak of water. Characters have almost no dialogues in the film. They are reciting. All potential disturbances in the process of merging audience with the atmosphere have been removed from the film. Film must be like water.

Photography is flowing in a similar way as the texts. As we move to the second part of the tryptic, and step into the past, into the time of San Manuel Bueno, photography is losing its quality. From the clarity of the beginning of the film, we move to the world of grainy photography characteristic for 16-mm cameras. Then, we make one more step and end up in the future where people move slowly, in choreography, and photography is shot on VHS. Past is blurred, but not nearly as blurred as the future.

Using three times, three lakes and at least two art forms (film and literature) Komljen speaks of water in practical and metaphorical sense. Every water is microcosmos, just like every film, but if we approach them in the right way, they can become the whole world to us.

You can watch Afterwater, that had its premiere in Forum of Berlin Film Festival, today at 6 p.m. in Cinema 3 of Cineplexx in Sarajevo.