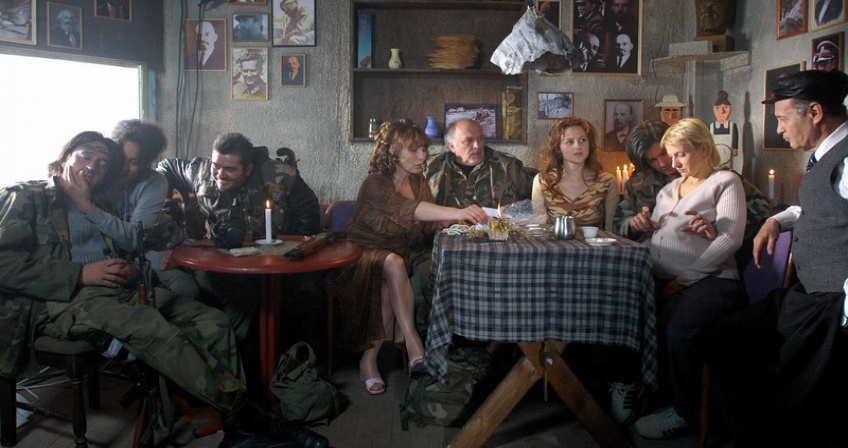 What happens when Jennet Hugh, an American black woman, falls into one of numerous holes in a city under siege on the evening of the 31st December 1992. In our film story, there she meets Red Eye, a soldier who suffered a terrible tragedy in a Bosnian country town at the beginning of war and since then does not know who he is or what his name is. Blood reminds him of his past, which is why they call him Red Eye. Sado was a hero during the war; his wife Saba is very proud of him. Ahmed is the greatest victim, even the prisoner of war. At the beginning of war, he wanted to go to America and Hollywood, because he liked film. Šahbej was a commander during the war, but is forgotten and unhappy after the war; now only children listen to him and respect him. Marks owns a buffet Kapital and all characters of the story come to the place. Photograph Nemanja is one of those who was the first among the soldiers and then went over to the other side, shot on the city, and returned to the old company after the war trying to regain their lost trust. The film follows this gallery of characters through the war and post-war period. This is a story about their lives, tragedies, personal passions and dramas, but also a story about their solidarity and belief in freedom and happier life. In a way, this film is dedicated to all survivors of the city under siege and an Encyclopedia of the Living on its own. For this reason exactly, they will, at the end of the film, through Ahmed's dream and film, sail down the Miljacka and go as far as the Seine and Paris on the Red Eye's raft. In this film story, characters believe in life and the "wonder in Sarajevo". Why shouldn't we?