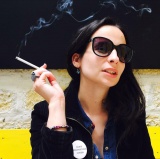 BOJANA VIDOSAVLJEVIĆ was born in Sarajevo in 1987. She graduated dramaturgy from Sarajevo Academy of Performing Arts and she is currently completing her MA studies at the same department. She works at the Academy of Performing Arts, as a teaching assistant in Screenwriting. As a dramaturge, she has worked on several plays and stage productions at the National Theater Sarajevo, Sarajevo War Theater, Youth Theater Sarajevo, Bosnian National Theater Zenica, MESS Stage and City Drama Theatre “Gavella” in Zagreb. She received awards for the best dramatization at the Festival of National Drama  in Zenica for the productions "My Factory" (BNP Zenica) and "The Secret of  Raspberry Jam" (SARTR), for which she also received a special award from the jury of the International MESS Theatre Festival for dramatization and dramaturgy. She is one of the editors of BH Film Data Base. As a screenwriter, she worked on projects of the Radio Television of Bosnia and Herzegovina - Children's and Youth Program Department, such as the TV movie NO PROBLEM FOR MAGIC. For her feature film screenplay LAST BIRTHDAY IN YUGOSLAVIA she received an Award for the Best Project at EASTWEEK Trieste Film Festival. The same project was later developed at the MIDPOINT Institute workshops.