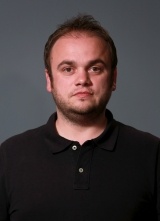 TOMISLAV TOPIĆ was born in Široki Brijeg in 1975. After graduating from high school he moved to Zagreb (HR) where he worked as editor and director for Croatian Radio-television for 15 years. He founded Mediterranean Film Festival in 2000 and since then he is working as its director. Beside the Festival he organizes workshops and screening of unconventional films. He works as a director and editor on documentary and experimental films.