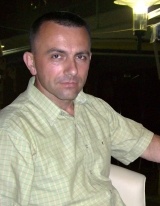 PREDRAG SOLOMUN was born in 1972 in Bosanski Petrovac. In 2004 he graduated TV editing at the Academy of Arts in Banja Luka. He has finished his Master studies in Drama and Media at the Faculty for Drama Arts in Belgrade, Serbia, where he is also finishing his Doctoral studies. Since 2006 he has been teaching editing at the Academy of Arts in Banja Luka and currently he is Dean for Academic Affairs. In a period between 1997 and 2006 he worked as an editor at the Radio Television of Republic of Srpska and Bel Televison. He is one of the founders and vice president of the Association for Visual Arts FENIX ART in Banja Luka and from 2008 Program Director of the International Animation Film Festival Banja Luka.