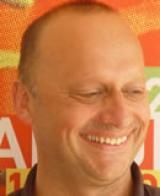 MIRSAD PURIVATRA was born in 1958. in Sarajevo. During 1980s he worked at Open Stage Obala on the production of numerous theater plays among which the most successful were Tattoo Theatre and Moonplay. During the war in Bosnia and Herzegovina, Obala organized a number of exhibitions by B&H authors that were shown around the world, while in Sarajevo Obala hosted many international artists such as Christian Boltanski, Annie Leibovitz, Sophie Ristelhueber,  Anthony Gormley, and initiated the working of a war cinema, presenting not only successful films but also retrospectives of other festivals such as Locarno and Edinburgh Film Festival. In 1995, Obala establishes the Sarajevo Film Festival that has grown to one of the most influential film festivals in Europe. He was also director of B&H Soros Open Society Fund (1994-1996); director of B&H Radio and TV (1998-2000), General Director of the B&H branch of MacCann Erickson marketing agency (2000-2004). Today Purivatra is fully engaged as the Sarajevo Film Festival Director and he served as a Jury Member at numerous festivals among which are Tribeca Film Festival, Berlinale Panorama, Taormina Film Festival, etc. He also teaches Production at the Sarajevo Academy of Performing Arts. He is the recipient of Knight of the Order of Arts and Humanities (Chevalier de l'ordre des arts et des lettres) was bestowed by the Republic of France in May 2008. He produced short films made in the framework of project SARAJEVO CITY OF FILM from 2009 to 2013.