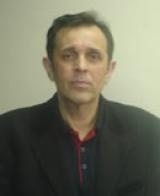 MILENKO PRSTOJEVIĆ was born in Sarajevo in 1957. He has completed film and camera school in Pula in 1978 and gradated economy in 1983 in Sarajevo. He has been a member of Association of Filmmakers for over twenty years; from 1988 to 1994 he was its general secretary and from 1006 to 1008 its Board President. Until 1992 he worked as line producer and head of animation studio FRZ BOSNIA. He worked as line producer, organizor, cameraman, assistant director, documentary film director and feature program producer of Federal TV. During the war he was involved in production of films with SAGA, FAOS and PROFIL. He is currently working for Federal TV as a producer of the culture and entertainment program. He won the first award at the festival of B&H film for his short FATALNA LEKTIRA in 1998.