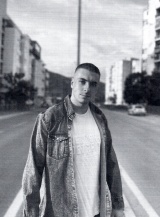 Kristian Pandža (Kristian-Drago-Veny Pandža) was born in Gummersbach (Germany) in 1992. After graduating from high school and first serious acting engagements in the theater, he successfully completed BA studies of German language and literature at Faculty of Humanities in Mostar, as well as MA studies od dramaturgy at Academy of Arts in Banja Luka. During his student days, he worked on many projects as screenwriter and actor. He received international acting award Večernjakova Domovnica in Bad Homburg in 2015. He is currently completing his doctoral studies in dramatic arts in Cologne. He publishes scientific papers in the field of filmology, theater and literature as an independent researcher.