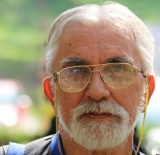 RATKO OROZOVIĆ is a film, TV and theatre director and a writer. He recently celebrated 50 years of his art work. In addition to five books, his creative work also includes two feature films VANBRAČNA PUTOVANJA and BRAČNA PUTOVANJA, as well as more than 50 documentary films and 700 TV films and broadcasts. He was awarded 11 national and 15 international prizes.