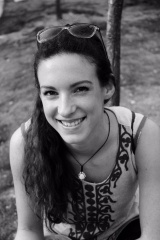 ENA OMEROVICÌ was born in Dubrovnik. She has been working at various film festivals (Sarajevo Film Festival, International Rotterdam Film Festival, Netherlands Film Festival, International Documentary Film Festival Amsterdam, Eastern Neighbors Film Festival The Hague). In 2013 she moved to the Netherlands to study Film and Television Studies at Utrecht University. She graduated with her MA thesis Shooting Under Siege : A Study of Documentary Film Production Culture in Times of War; about the production culture of documentaries during war-time in Sarajevo. She is part-time research assistant at Utrecht University. Beside that she teaches the course Media Literacy to refugee children at the school Ithaka in Utrecht. Ena made her first short documentary in 2016; MY LOVE-LI SISTER.