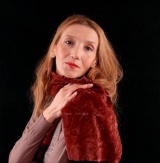 Emina Muftić is Bosnian theatre, film, television and radio actress and professor at the University of Sarajevo. She was born in Sarajevo, where she graduated in acting from Academy of Performing Arts in 1987. She started her rich theatre career as a member of drama ensemble of National Theatre Subotica and theatre in Bosanska Krajina. After that came prominent roles in Kamerni teatar 55 in Sarajevo, where she became a member of ensemble in 1992. During the war, together with her colleagues in besieged city, Emina Muftić boldly carried on with her profession. She is a founder of organization „Flowers of Love“ that brought cultural events in hospitals, shelters, schools, kindergartens and battle lines. From 1999 until today, Emina Muftić collaborates with drama ensemble of National Theatre Sarajevo. She began her teaching engagement at Academy of Performing Arts of University in Sarajevo in 1994. From 2012, she is employed there as full professor teaching Speech.
In addition to her numerous theatre, film and radio roles, Emina Muftić has been acting in a lot of television productions, such as following series: PRIČE IZ FABRIKE, ALEKSA ŠANTIĆ, VIZA ZA BUDUĆNOST, CRNA HRONIKA, TATA I ZETOVI, LUD, ZBUNJEN, NORMALAN, TURETSKIY TRANZIT and GAME OF TRONES.