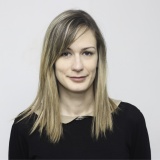 ASJA KRSMANOVIĆ was born in Sarajevo in 1988. She graduated dramaturgy from the Academy of Performing Arts in Sarajevo. She worked as a dramaturg for numerous theatre plays, as well as some radio and television projects. Since 2011, she has been working as co-ordinator of the Competition, Competition Short and Focus Program at Sarajevo Film Festival, and since 2017 she has been running the Student Competition Program. She worked as an assistant director on several short films. She wrote screenplay for short film DAMAGED GOODS directed by Nermin Hamzagić.