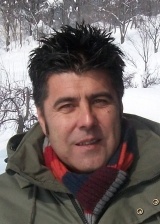 FEĐA ISOVIĆ was born in Dubrovnik in 1965. He lives and works in Sarajevo. Scriptwriting deals since 2005 when he wrote the screenplay for WELL TEMPERED CORPSES. The most famous series he is writing is a sitcom LUD, ZBUNJEN, NORMALAN. He is also author of radio dramas and TV documentaries. He has won several awards for his work.

2005- HANDS THAT SEEK PAIN, doc.;HOME FOR FORGOTTEN PERSONS, doc.; FIRST THERE WAS GOD, THAN BORO, doc.