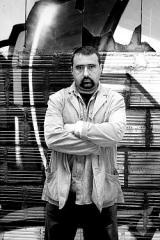 DAMIR IBRAHIMOVIĆ was born in Sarajevo in 1965. He holds a degree from the School of Economics. He is a director of the "Deblokada" artists' association.