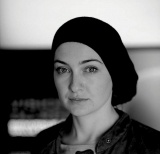 NEJRA HULUSIĆ was born in 1985 in Sarajevo. She graduated directing from Sarajevo Academy of Performing Arts. With her project UNDER THE COVER nominated for Robert Bosch Co-production Prize and awarded by Balkan Documentary Center. Her documentary HER CINEMA LOVE was in competition selections of HotDocs, Visions Du Reel, Makedox, Dokufest, Zagrebdox, DOK Leibzig... Her newest documentary THE INFIDEL has won Jury Award for Best Documentary Film and Audience Award for the Best Picture at last years’ BH Film Festival in New York. She is one of the founders of the Association Hava Film. She is currently employed as a director on Radio TV of Bosnia and Herzegovina.