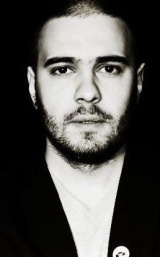 NERMIN HAMZAGIĆ was born in 1986 in Sarajevo. He graduated directing from Sarajevo Academy of Performing Arts, where he works as a teaching Assistant. He is working as theater and film director. He directed his debue feature film FULL MOON in 2019. He established MESS Market, regional platform for theater production as a part of International Theater Festival MESS. He is Association of Filmmakers Board member since 2020. He received numerous awards for his theater plays and films among with: Ecumenical Jury Award at Cottbus Film Festival for FULL MOON; Special Jury Mentions at Auteur Film Festival and 1st International Festival Bosnia-Herzegovina looks around Bottrop for INTERVIEW and Special Jury Award at Sarajevo Film Festival and Best Short Film Award at BH Film Festival in New York for DAMAGED GOODS.