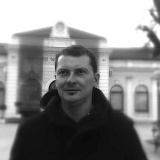 ENSAR HALILOVIĆ was born in 1978 in Travnik (BiH). He finished high school in Italy (Bari) and graduated from the Faculty of Economics, University of Sarajevo, Department of Information Systems Management. Since 2001, he has been working in film production on international and domestic film projects. He is a co-founder of the production company Scout Film from Sarajevo, which was established in 2005.