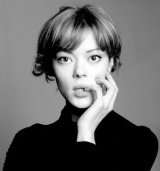 AIDA BUKVA was born in 1985 in Foča (BiH). She graduated acting from Sarajevo Academy of Performing Arts. She has acted in many theater plays at the Otvorena scena Obala, Chamber Theater 55, Sarajevo Youth Theater, etc. She was awarded with the Brave New World Award at the MESS 2008 Festival as a part of theatre play „Spring awakening“ directed by Selma Spahić, and Best Actress Award at 32nd Brčko Theater Meetings in 2015. She has also starred in several TV series. In addition to starring in several short films, Aida Bukva was cast in the leading roles in feature films THOUSAND by Nenad Đurić and SO SHE DOESN’T LIVE directed by Faruk Lončarević.