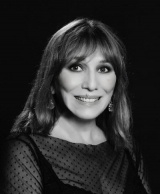 JASNA ORNELA BERY is one of the most famous Bosnian actresses. She graduated Drama Studies from Sarajevo Faculty of Philosophy as well as Pedagogy. She appeared in over 100 roles on film, in theater, television and radio. She acted in over 30 films and 16 TV series(DVA SMO SVIJETA RAZLIČITA;NE DAJ SE NINA;PEČAT;FOLIRANTI;LUD ZBUNJEN NORMALAN, etc.) The films in which she starred were screened at major film festivals and have received more than 100 awards, including major awards (Golden Bear at 56th Berlinale, Grand Prix of Semaine de la Critigue -Cannes Film Festival,etc.), while six of these films were BiH candidates for Academy Awards. She won several prestigious awards, honors and  diplomas for her work in theater. She has produced three theater plays in Belgrade, Zagreb and Sarajevo. She lived and worked in Zagreb for few past years. She is a member of Sarajevo "Chamber Theater 55" ensemble.