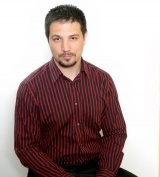 BORIS BALTA was born in Tuzla in 1979. He graduated acting at the Academy of Drama Arts in Tuzla in 2004. He defended his MA thesis “Patriarchal norms and stereotipes on BH film made in 80s” in 2011. at the Center for Interdisciplinary Postgraduate Studies” at the University of Sarajevo. At the moment he is working as a Head of Tuzla Film Festival and as an actor at the National theatre in Tuzla.

2013 - JUST A DREAM IN REALITY, short (producer, writer and director)