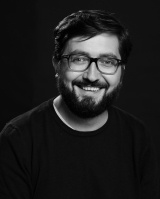 ADIS ĐAPO was born in Trebinje (Bosnia and Herzegovina) in 1981. godine. He has been involved in film production since he was 18 years old when he started working at SCCA Pro.ba Production Company. He has been working in film production as production assistant, coordinator and now as executive producer and producer. Recently he was working as Executive Producer on films CHILDREN OF SARAJEVO by Aida Begić and AN EPISODE IN LIFE OF AN IRON PICKER by Danis Tanović.