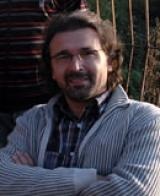 ALMIR ŠAHINOVIĆ was born in Sarajevo in 1971. He is the founder of HEFT production company in Sarajevo. In addition to film, Šahinović produces for theatre as well as television.